Well, technically this review is of all The Caley labels released to date. Th 2016 is the fifth release of the Icon red wine, named in honour of Fred Caley Smith, grandson of Yalumba’s founder: Samuel Smith.

Fred was a horticulturist who is best remembered for a ground-breaking research journey he undertook in 1893 and 1894 to the USA, UK, Europe, the Middle East, Sri Lanka and India. While travelling, Fred sent home detailed and poignant letters to his father every few days. The letters were discovered under the staircase in the famous Yalumba clocktower. They since been collected, retained and are kept in the Yalumba archive. Jessica Hill-Smith, now brand ambassador and relative of Fred, feels an affinity with what he was trying to achieve: sustainability and sharing across the globe.

The first year, the 2012 came about after discussion with then winemaking legend Brian Walsh and 5th generation vigneron CEO Robert Hill-Smith seeking to make a “reserve” wine, when the strength of the vintage demanded a special wine. The directive was set down: to be Coonawarra dominant and Cabernet Sauvignon dominant. Now winemaker Kevin Glastonbury spoke of the desire to find comparisons from the public once the wines were released, and now after 5 releases, they’re starting to find the synergy. Glastonbury wants to “applaud vintages, applaud the differences and celebrate the greatness of each vintage.”

55% Coonawarra Cabernet Sauvignon and 45% Barossa Shiraz. Carries the most Shiraz of any of the releases. Herbal lift with pepper and leaf spice, plum and gummy tannins. Black fruit compote with cardamom spice and mud brick. Closed and solidly shouldered with elegant texture and structure, while the still austere fruit tapers. Surprising acidity with intensity, force and fly screen tannins tightly strung. Will be very long lived. 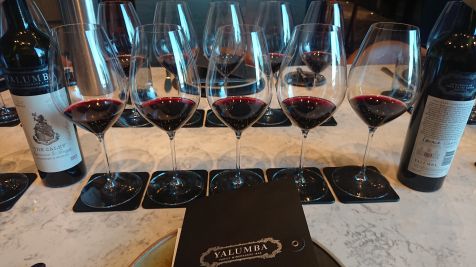 82% Coonawarra Cabernet Sauvignon and 18% Barossa Shiraz. This release sees the Yalumba team starting to really define the style for the label. A parcel of the Shiraz sourced from Yalumba’s Horseshoe Block, planted in 1971 by Helen Hill-Smith and follows contours around Fred Caley Smith’s hut. This vineyard will continue to be a part of the blend for the next two releases as well.
Oak char and smokiness, polish, black fruit and boiled mint lolly sheen. Underlying meatiness/umami, blood grapefruit, dark chocolate and rose water/ Turkish delight. Primary and assured with super tightly knitted tannins. Lingering, long long mocha flavour tail carrying exquisite balance.

74% Coonawarra Cabernet Sauvignon and 26% Barossa Shiraz. Kevin Glastonbury describes this as the “garagiste” release. Fragrant and spice lead, possibly a little too cloaked with the oak spice for the moment. Underneath there’s olive leaf and peppery spice with dusty blackcurrant, leather, walnut and nori umami. Gripping and powerful, velvety tannins dominate the lean, tight and closed body with seemingly near-miserly fruit (for the moment). The structure is angular and not quite as generous as other vintages if one has to have any complaint..

Disclaimer: Paying for my own travel, I attended the launch as a guest of Yalumba