Once again, apologies dear reader for the spasmodic updates to this webpage. It seems that Europe offers more to do than sitting in a Chambre d’hote each night  documenting the days activities in cyberspace.
We last left off from the chalky, deep troglodyte caves of the Loire headed almost directly south towards Bordeaux & big red grand cru territory.
Along the way, we had a quick rendezvous/lunch stop with good friends: Mick, Mary & Michelle Devereaux in the commune of Les Alleuds. They’d ensured we would not miss the turnoff by subtly flagging the sign posts. 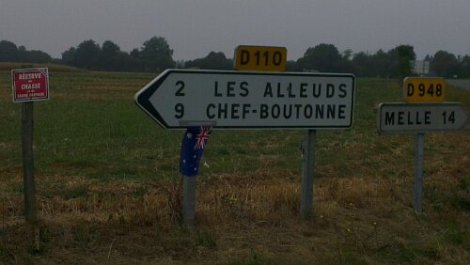 Whilst their name may be as old and as French as the surrounding buildings, they are quintessentially Brummies from Birmingham UK. It seems that there’s a thriving British expat community setting up in the south-west of France. Lured by good local food, cheap wine, clean air and an easy way of life that hardly seems a chore. But a little more of that later.
We were there long enough for a longish lunch in the bright sun with a little too much rosé imbibed by some of us (a dangerous sign of days to come) before an easy drive into Bordeaux, past Cognac and its seemingly infinite vineyards.
Arriving on a Saturday evening when the locals were all getting primed for a large night out made the place feel a little alien and dirty after the pristine Parisian boulevards and the cleanliness of the rural and ancient Loire Valley.
Up and out the next morning on a warm Indian summer day we headed to Paulliac in the Médoc.
A private tasting at a Grand Cru vineyard based on a 14th century castle is a pretty impressive way to get introduced to Bordeaux. La Tour Carnet was almost destroyed during the 100 Years war after the British knight who claimed the land was defeated during a siege. Rebuilt and occupied in 17th century by Michael de Montagne the French writer, it was then lived in by Swedish nobility for almost 300 years. This lineage meant the Chateau was spared during the Revolution as it was not English owned nor were the occupants French nobility! Who would have thought Revolutionists were so considerate?

The sun was high with those white stones reflecting the heat, it seemed a poor day to taste heavy red wines, but the cellars were cool and inviting.
The grapes were plump and almost ready for harvest; the winery surgically clean and ready for the chaos that would soon descend.
Whilst La Tour Carnet is proud of the ancient history that embodies its home, the winemaking philosophy is thoroughly modern. They’d just taken delivery of a concrete egg for trial with their Grand Cru Merlot. Seems that the egg theory for wine fermentation has gone mainstream.

The wines were Merlot dominant with Cabernet Sauvignon next and small parcels of Cabernet Franc & Petit Verdot. Balanced with bright fruit, their structures smack of a long life ahead.

Our next tasting was at Chateau Maucaillou. A Cru Bourgeois winery that had been elevated honorarily due to their history; their wine production and their vineyard maintenance are top quality: they can not use any of this on their labels, but still command a better price for their wines than others.This Bordeaux class system is almost as hard to understand as a French roundabout.

We had a dinner appointment with Nadine’s mother Perri, and her friend Sharon (from Buffalo, USA). They had been on a bus tour of their own around France and we managed to cross paths for one night. We picked them up from their hotel in trusty Pablo…after Nadine had been presented with her chocolate shoe birthday present in front of the entire tour group! 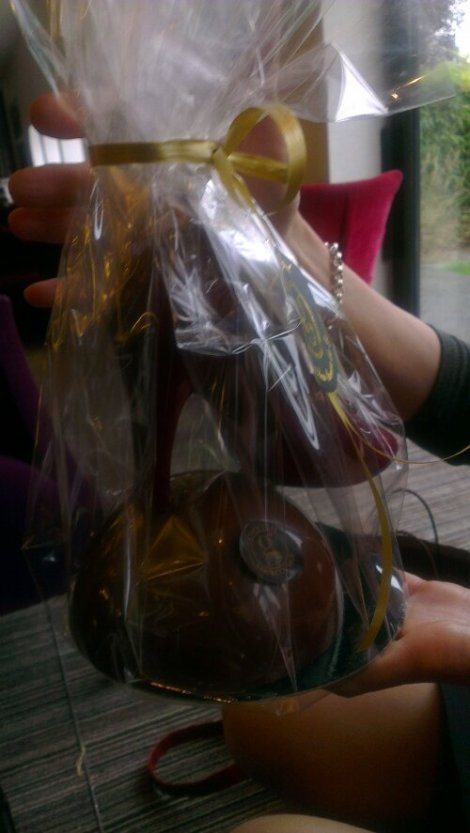 Whilst wandering the cobblestones of downtown Bordeaux looking for a dinner venue (and after Nadine had completed an awesome effort of a reverse park, left hand drive, in the centre of town on a busy Sunday night) we were caught in a downpour that turned to a thunderstorm.
There’s been murmurings of an awkward 2012 vintage for France and powerful rain when grapeskins are taut with precious juice doesn’t bode well for a bountiful harvest. I’ll touch more of the 2012 harvest later in the Burgundy report.

Dinner was randomly counterpointed nicely with the Chateau Maucaillou No.2 well priced on the brasserie wine list. Easy to drink and perfect with local Entrecot steak.
A teary farewell we parted leaving them to continue their own journies: Perri by train through Germany & Sharon
spending time with friends in the Netherlands.
We will next see Perri in Hobart at Christmas and who knows when we’ll catch Sharon again, but it is definitely our turn to visit her.
Out early the next morning and headed North again to Les Alleuds for a relaxing week of French country living…or so we thought!

One response to “Bordeaux..the Left Bank is All Right.”